We loved (and lost) our Mirelurk King friend in Fallout 76

Did you know that Fallout 76 lets you have pets? If not, I don’t blame you. Fallout 76 never explains the mechanics of this, and there’s not much of a gameplay benefit of having a Deathclaw roaming your camp. You know what having a pet does grant you? The warm glow of knowing that you benevolently saved a creature from the harsh life of the wasteland.

That is, unless Fallout 76 betrays you, and feeds wave after wave of creatures to your beautiful Mirelurk King, until he grows so fat off the excess and slaughter that he breaks loose from the bond you forged and runs off into the wilderness.

This is a story of friendship, love, and despair ... but it’s also a tale of hope. Let me tell you all about Murray the Mirelurk King.

My friends and I have created a little town in Fallout 76, not too far off from the Top of the World ski resort. There’s a gentle path that works its way through the woods, a creek nearby for water purification, and some vertical ground that makes for interesting building. I have created a headquarters for the Homeowners Association of Post-Apocalyptic Appalachia, and another friend has crafted a loving church where worshippers can attend services and praise the Mothman.

My one buddy Jake has created a charming little bed and breakfast, right off the path. The bed and breakfast is built up on a layered cliff, with a little cove. That cove was where Jake put Murray. Murray was part friend, part attraction, part protection.

Jake had originally tamed a Deathclaw, but people tend to panic when you have a 12-foot-tall muscle beast hanging out with your cows. Darryl the Deathclaw had to go, and he was replaced with a fishy friend. It seemed like a bright new era for our little community. Weaker, lesser neighborhoods may have defenses like “turrets” or “gun,” but those are for cowards.

We had Murray, and when he wasn’t swimming happily in his secluded cove, he would wander onto dry land and rip apart robots and giant, infected bears with his bare, webby hands. We loved him so much, and we’d watch him caper while we traded our supplies and prepared to trek out. Soon, his little teal and pink dot would disappear into the horizon, but we knew that he’d be waiting for us when we returned.

MURRAY WAS OUR FRIEND

It’s important to recognize the role of our CAMPs is only partially to build things and create wonderful environments. There is a joy in creating a home, or a business. We’re also trying to create a lure so that other players will see what we have built, come check it out, and then be snared into our monkey business. We want to give guided, in-character tours of our CAMPs. We want to be able to try to rope people into joining an ill-thought out, violent homeowner’s association.

Think of it like a Venus fly trap, except instead of being slowly dissolved with acid, you have to deal with our bullshit. That’s probably better.

So, Murray was more than just a treasured pet. He was a draw — a star! — and he enabled us to play Fallout 76 like a bunch of silly sausages. Jake even put up some posters, giving his cove some atmosphere. 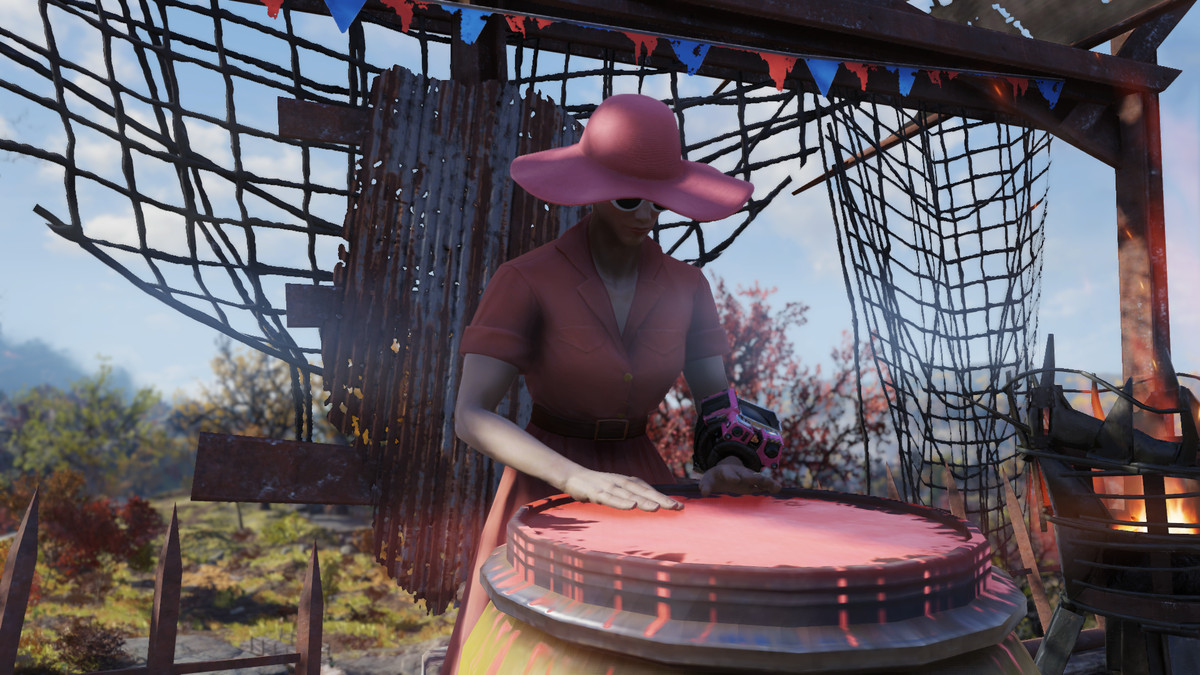 Our social approach to the game ended up backfiring on us. Our town was right on the edge of a creature spawn for a two-week event called Meat Week. Dozens of high-level monsters would spawn, and players would be tasked with killing them all for their meat, which they would then take to a barbecue. I didn’t spend much time in Meat Week, but Jake did. He was online, killing beasts and collecting their meat.

What we didn’t know is that Murray was too.

The pet system in Fallout 76 is ill-defined, and relies on the creature’s level in relation to the player level. While Jake farmed for meat, so did Murray. When creatures spawned, they would instinctively run for the bed and breakfast ... where they met Murray. He would kill them. He gained dozens of levels, and then ran off into the night, never to be seen again.

There’s no moral here. No lesson to be learned. We were simply looking into the eyes of an uncaring God, and we blinked first. All we can do is hope that Murray is happily snacking on a bunch of corpses, out there somewhere in Appalachia. We gambled on an unexplained, mysterious mechanic, and lost. I guess the real enslaved mirelurk king we kept in a cove was ... the friends we made along the way.